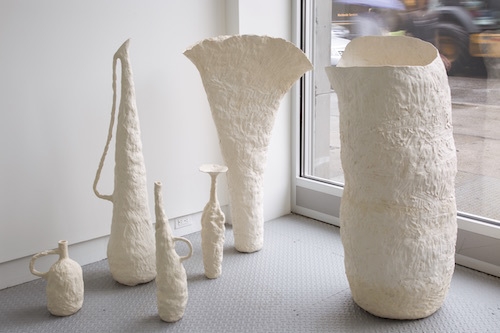 This exhibition views the human body through its dehumanization. The show’s title alone, “Sticky Fingers,” evokes all manner of flesh, tainted and tantalizing. Caroline Mesquita’s carnival of sheet-metal monsters, displayed here as sculptures, also surrounds the artist in her video The Ballad, 2017, where they engage in standoffs and sexual acts. An Te Liu’s sensual skull-like bronze abstractions (unexpectedly carved and cast from Styrofoam packaging and domestic artifacts) perch atop skinny plinths, while a dismembered body by Piotr Łakomy—multiple works composed of casts of himself and articles of clothing made from industrial materials—is scattered around the show.

The cellulite surfaces of Elizabeth Jaeger’s Blonde Pots, 2017, lovingly smeared with the artist’s handprints, carry the show’s undertone of female solitude—such lonely bodies, even as they stand together. This sense of estrangement crops up in Meriem Bennani’s iPhone-shot video as well: Ghariba (Stranger), 2017, is a stoner-TV-style document, à la Tim and Eric, of women from the artist’s family in her native Morocco. Like Jaeger, Bennani ponders female representation, but through a profoundly distorted lens, making her subjects alien. Bennani’s oblique message is felt by the incongruity of her content and her editing, that is, her life and her perspective.

The smallest yet most central of the works here is Louise Sartor’s Bolo, 2017, a gouache of a woman devouring spaghetti painted on a half-size egg carton. Her flaxen hair obscures her face, and thus her identity. Domesticity, debris, self, and isolation come together in Sartor’s piece, which illustrates not only slippery digits messy with spaghetti sauce, but also the “sticky fingers” of the show’s artists, meticulously forging an image of human life from raw material.