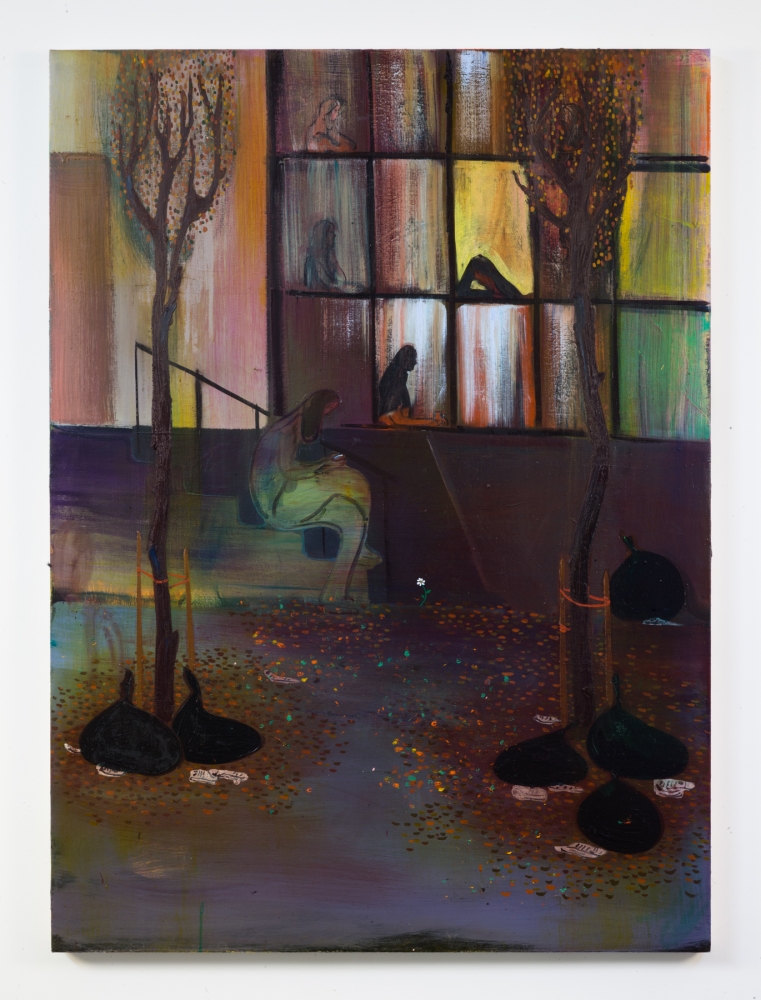 The women in Heidi Hahn’s latest series of paintings at Jack Hanley Gallery are presented in profile, almost like subjects in Muybridge motion studies. Muybridge, of course, did his motion study photos in order to be able to see details that normally escaped the eye. So, basically, what do we see in these paintings of women schlepping around in inclement weather, with leaves falling from trees, among big plastic garbage bags on the streets? Is there something about being in motion, carrying their weighty bags among the backdrop just described, that might better reveal the identities of these women or a deeper truth about their lives to us? Can we really get who these folks are by capturing them in such a type of freeze frame?

And yet, one might ask whether anyone would really ordinarily pay extra attention to this type of person – she is somewhat common in New York City – an independent, young, culturally aware, possibly socially committed, urban woman. If we take a closer look, however, we might see that she does, in fact, warrant being seen more closely because she very well could be suffering to some extent. This type of expressionistic, Muybridge motion study seems to reveal that this person we encounter everyday and dismiss, perhaps, as a benign presence, an apparently comfortable member of the liberal, white-collar class in New York City, may actually demand our sympathy and fellow-feeling as well. Of course, many of us who wander through the Lower East Side galleries may be able to identify to some degree with this type of figure.

These women do not seem to be moving forward very decisively or enthusiastically. We are encouraged, through our educational system, to pursue our own excellence often to the neglect of others; has this type of person finally left school and arrived at her long-struggled-for, beyond-reproach niche in the Big Apple only to find it is not all that it was cracked up to be? Perhaps all the competition and anxiety was not really worth it? Are these folks schlepping in callous self-absorption? In liberal guilt? In longing for something or someone lost? In self-pity? In the awareness that their lives may have been altered or constrained due to their gender? Are they just schlepping while thinking of nothing? Is this just neutral wandering between places in the city? In these periods of transition do these women reflect on the nature of their lives or do they unconsciously betray some unspoken form of distress?

These folks seem inaccessible even though they are not moving forward with an aggressive purpose. They seem to have accepted things, yet they are not comfortable in this acceptance. They are clearly showing external pressures, stresses or concerns that are not currently present. They are preoccupied. They seem alienated from us through their hardship. We catch them at a point where they cannot smile at us reassuringly.

Other art writers have pointed out that these figures are a bit gangly and awkward. These women do not conform to the golden ratio in their body proportions and might be missing most, if not all, of the traits that typically confer physical beauty to a woman from the traditional male perspective. Hahn’s work in the past has referenced the way women have been depicted throughout the history of art – is the perceived distress of these women due to the lack of attention these women have paid to meeting the expectations of men? Are these women who have read ‘The Beauty Myth’ and stopped trying to conform to some male expectations that if they are to be successful they must also sexualize themselves as a type of compensation? Are these women who have struck out on their own, are not trying to meet physical or beauty standards (or perhaps were never able to meet these standards), and who are suffering the consequences, and perhaps even surprised at themselves for suffering these consequences? We still live in a world where body shape and gender can influence success. It could well be that this is the source of the discomfort in these women.

So another important aspect of Hahn’s work might be that the history of art has been so badly tainted by negative and sexist depictions of women, that when we see women depicted in visual art, we almost always, despite ourselves, are forced to view them within the reference of the skewed perspective of art history. We have a frame of reference toward the depiction of women in art which is a distorted and sexist frame of reference and it might affect the way we see any depiction of women in art. By this, I mean that even a ‘neutral’ attempt at a depiction of a woman might be interpreted as either following a harmful tradition or diverging from a harmful tradition, and not viewed on its own terms, necessarily. Given the flawed history of the visual arts, and the oppression of women historically, maybe Hahn is asking: Can a woman just be a woman in a painting, with no historical baggage (ah, that’s what might be in those semi-cumbersome bags!)?

We still live in a society where body shape, gender and conforming to the beauty myth can determine success or, at the very least, can take its toll on someone who just does not want to be a part of that nonsense. It could well be that this is the source of the discomfort in these women who walk down the street with their expressions of apparently forlorn apathy in lieu of the excitement you might expect for a young, independent woman in the city. But, then again, the beauty of this show is that one is encouraged to ruminate on various interpretations as to what is ailing these women as they wander around town. The show ends on the 12th of November.